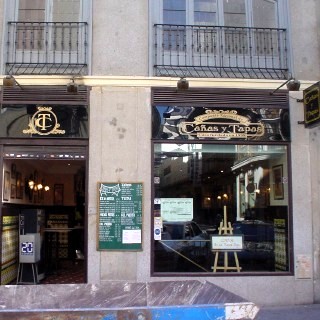 This franchise is cheap by Northern European standards: beer and tortilla (no patch on Isabel's) plus a couple of small tapas that I did not order (ham on pan con tomate, sausage and potato on a stick and a bit of chicken) but which were nice came to €7.10. The menu goes with a cheerful and accessible, er, beer and tapas experience - a nice and easy dinner for my first night in Madrid. This is, of course, the target market - tourists. By Madrid standards, this is actually much more expensive, and not really as good, as some of the other places nearby - Palacio del Jamón, for example. This is not all bad, though, because sometimes you need somewhere that is deliberately welcoming to people who do not speak Spanish, and it is a good step up from MacDonald's.

Bizarrely, a Flemish couple turned up to say proost to. So although I totally welched on my ill-conceived plan to avoid drinking beer on my first night in town, at least I did not speak any English. What is more, after we had been chatting in Dutch for a while, we discovered that the barman, helpfully labelled 'Daniel', was half Spanish and half French, so much of the rest of the conversation was in French. With just the occasional interjection in Spanish - dos otras cañas, por favor!.